Born in Poland but living primarily in Canada, I am a seasoned artist who has been painting professionally, steadily, since my graduation from OCAD in 1984. Being a rather prolific artist, I have accumulated a large body of work which has changed and progressed over time.

Over time the surrealism turned to dreamy lyricism and figures, still dominated my canvases. Examples are Flight, Moonair, Hide and Seek, etc. Turning away from social and cultural commentaries I began to express and explore the relationship between nature and the human mind; the animal side of life and the person as a thinking being. Acrylics replaced oil paints as I could be more energetic and spontaneous in my approach.

In time I wanted to deepen my understanding of nature and produced a series of work exploring the interaction between woman and mountains, woman and birds...thus a whole series of Birdwomen were born. Three of these are in the permanent collection of Commandarie d'Unet in France (a museum). Three different ones were stolen from the Grande Palaise in Paris where I was part of an international exhibition - Figuration Critique.

My next series led me to deepen my explorations again, throughexperimenting with texture and colour primarily. At this point my work became more abstract-figurative and layered. Visually, the canvasses became more intricate and colorful. The theme was meant to be sensed and felt rather than recognized immediately. Examples are Emerging, Almost, Goldmuse.

Then I began to do away with reliance on the figure all together and colour as well. With a minimal but rich palette I need to express the most ELEMENTAL essence of existence. This I have begun to do with my latest works; Blue Waters, Corner Lights, Current. Finally the figures have disappeared leaving only the raw, moody, mystery of basic existence.

In my opinion, the artist is not only helpful but also essential to the well being of society. Art is, and has always been, a means to communicate experiences, emotions and sensations, usually to others, using metaphor. The artist's role is to pick up on those ideas and to explore them with imagery. He/she uses the given cultural vocabulary to do so. And by doing this successfully, the artist can instill in the minds of the viewer a faith in the power of the creative mind. Put very simply, creativity is the single most important aspect of the human mind, because it allows knowledge to grow and mature. It is curiosity, imagination, unpredictability, ... And so we all need the artist, to move forward with our understanding of the world and with our appreciation of fantasy and insightfulness. Artists are not only the barometers of society, predicting the future but the instigators of new forms and systems.

Primitive man, in creating works of naturalism, was convinced that the image was a true double of reality. It was a work of magic by which man asserted mastery over the world. The primitive artist was a magician whose drawing was an incantation in order to insure fertility of crops and plentiful game. In other words art intervened with natural forces to attract "good" and repel "evil".

Modern art needs to go back to the primitive man's reason for creativity .. making the world alive.. and I try in my body of work to suggest that with the latest figurative-abstract series. Especially the piece..What Is It?. most important aspect of the human mind, because it allows knowledge to grow and mature. It is curiosity, imagination, unpredictability, ... And so we all need the artist, to move forward with our understanding of the world and with our appreciation of fantasy and insightfulness. Artists are not only the barometers of society, predicting the future but the instigators of new forms and systems.

Masks have been used by many societies to invoke magic into their lives. Both in North and South America, Asia and Europe. In Europe, mimes and clowns served the role of showing people the absurdity of life, and helping them to question existence and their mundane perceptions of reality. Especially the piece..What Is It?. My Masked Woman for example is looking internally and externally in the past and to the future at once for answers to the meaning of art and existence simultaneously. As a result more questions emerged and the mystery has been slightly deepened, as Francis Bacon would say. 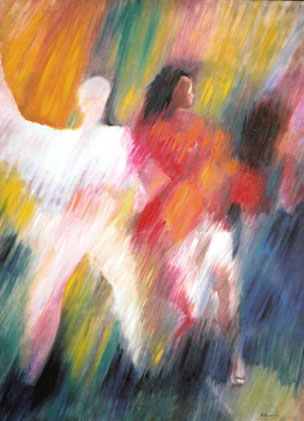 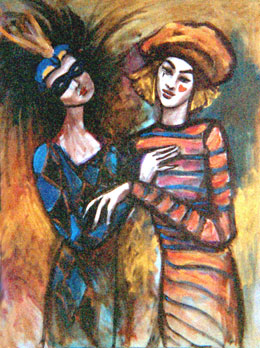